← more from
Batov Records
Get fresh music recommendations delivered to your inbox every Friday. 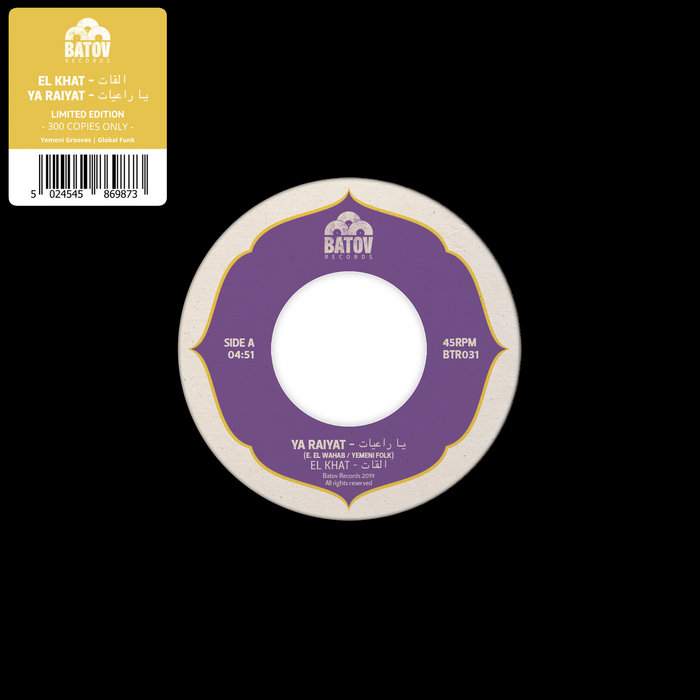 James Endeacott can't stop playing these wonderful 7' singles from Batov...ever home should have one...
Favorite track: Ya Raiyat - يا راعيات.

Global Riddims Another amazing discovery thanks to Batov. Looking forward to the full album.

DJ Kobayashi Super proud to have El Khat on Batov Records.
This 7inch is just what you need for your record collection.
The B-side is a killer edit by Radio Trip. 💥💥💥
Stay tuned for the full LP Favorite track: Ya Raiyat (Radio Trip Edit).

‘Ya Raiyat’ is the product of a traditional Yemeni folk song, dismantled and reformed by El Khat and Yemeni inventor, carpenter, and music producer Eyal El Wahab.
Recorded in Eyal's backstreet studio in Tel Aviv filled with mics, speakers, and a lot of junk much of which has been repurposed and turned into instruments of every persuasion.

Sung in Yemeni Arabic, it features a series of handmade instruments including the self-named 'Kearat', a large steel bowl with a piece of wood, some nails, and screws, and 6 strings sounding like a Banjo-Bass as well as a fuel plastic container and olive oil containers.
There’s a Pancello as well, which is played with a bow like a cello made out of a saucepan, broken shelf, and rope.

Khat is the natural plant chewed in Yemen and across the Arabic world.

'Ya Raiyat' comes from a debut album by El Khat set for release later this year.

Music by Eyal El Wahab based on Yemeni Folk Tune

Bandcamp Daily  your guide to the world of Bandcamp